The most infamous serial killers in the U.S. (NCD)

RIVIERA BEACH, Fla. — Skeletal remains found in a Florida mangrove swamp in 1974 have been identified as a missing teen, and authorities surmise she may have fallen victim to a serial killer who authorities once said “made Ted Bundy look like a Boy Scout.”

Susan Gale Poole was 15 when her family reported her missing from their Broward County trailer park just before Christmas 1972.

“Nobody knew where she went,” Palm Beach County Detective Bill Springer said Thursday. “Her clothes (and) pocketbook were still at a (friend’s) apartment that she was staying at.”

At the time, Poole’s family and friends did not know if she had left of her own accord or if she had met with foul play. Poole had a history of hitchhiking and had left home once before.

No sign of the missing teen was found until the morning of June 16, 1974, when a man and his sons went looking for driftwood in a swampy, wooded area of Singer Island known as Burnt Bridges. According to news accounts at the time, they instead found scattered human remains and scraps of clothing.

“She was tied up in the mangroves with wire to a tree,” Springer said at a news conference. “She was skeletal remains, totally nothing left of her except bones.”

Authorities attempted to use dental records to identify the girl, who was estimated to be between 13 and 19 years old when she died. She was believed to have been slain between eight weeks and eight months before her remains were found.

With no identification and no suspects, the case went cold.

Meanwhile, the assaults and deaths of several other women in the Palm Beach area had been making headlines.

In July 1972, five months before Poole vanished, two vacationing teens were hitchhiking near the beach when they encountered an on-duty Martin County sheriff’s deputy named Gerard John Schaefer. Schaefer told Nancy Ellen Trotter, 18, and Paula Sue Wells, 17, that hitchhiking was illegal there, though it was not.

“He called into the station on his radio and said he had two girls and asked if it was okay to take us home,” Trotter told a reporter in 1973. “They said to him, ‘OK,’ so we got in the back seat of the police car and he took us to our apartment.”

The deputy, who previously had served as a Wilton Manors police officer, drove the girls to their destination in Stuart and offered to drive them to the beach the next day. The following morning, he met them at the predetermined location, in plain clothes and driving his own car, and began driving them.

He didn’t take them to Jensen Beach, however. Instead, he drove them to a dilapidated shed on Hutchinson Island, where he gagged and handcuffed them.

Schaefer bound each girl to a tree and tied a noose around her neck, according to a Palm Beach Post story. He forced them to stand on exposed tree roots, where one slip of a foot could hang either teen. 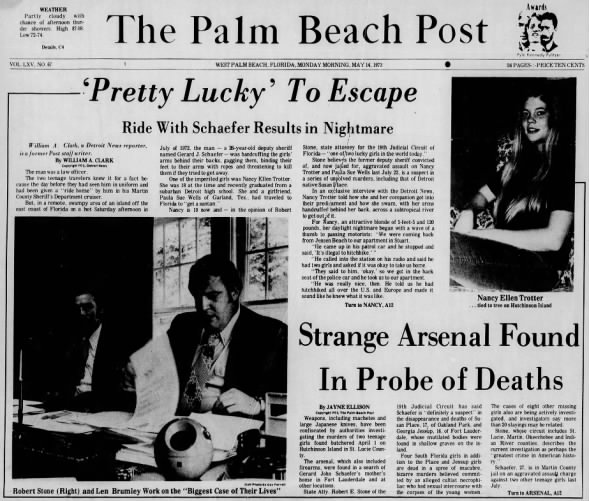 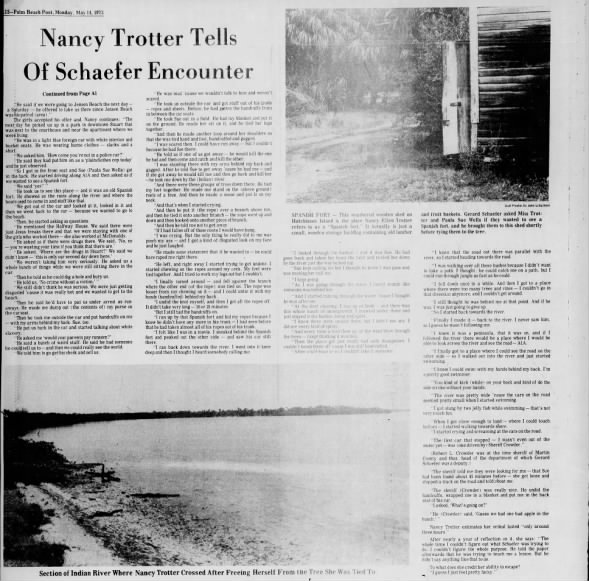 When he left for a while, however, the girls escaped. Wells was picked up by a truck driver and taken to the station.

Trotter was later found swimming, her hands still cuffed behind her back, in a nearby river.

She had made it most of the way across and was trudging the rest of the way to the bank, crying and screaming for help from passing cars, when Martin County Sheriff Robert Crowder pulled up and helped her to safety.

Schaefer had called Crowder and admitted what he’d done when he realized the teens had escaped.

“I’ve done something foolish,” Schaefer told his boss, according to published reports. “You’re going to be mad at me.”

Schaefer told the sheriff he had “overdone” his job while trying to teach the girls a lesson about the dangers of hitchhiking. No one believed his story, however, and he was arrested and charged with aggravated assault and false imprisonment.

The former deputy was free on $15,000 bail when he struck again. That time, no one survived to identify Schaefer as their attacker.

Susan Place, 17, and Georgia Jessup, 16, vanished from Fort Lauderdale on Sept. 27, 1972. Place’s mother told police she and her friend had left with an older man they called Gerry Shepherd to go to the beach.

They were never seen alive again. According to reports, Place’s mother, suspicious of the girls’ friend, jotted down the license plate number of his blue-green Datsun.

The car would eventually be traced to Schaefer. Lucille Place also identified the former officer as the man she had seen with her daughter and Jessup.

The girls’ decomposed, mutilated remains were discovered six months later, on April 1, 1973, by a father and son scrounging for discarded aluminum cans on Hutchinson Island. The location where the grim discovery was made was about six miles from where Trotter and Wells had been attacked the previous summer. 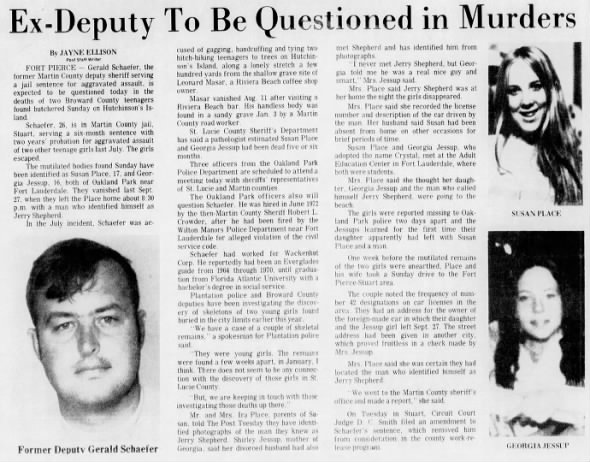 At the time their remains were found, Schaefer was serving a six-month sentence for the assault on Trotter and Wells, according to a 2010 TCPalm story.

Both Place and Jessup had been bound to a tree and murdered, their bodies beheaded and dismembered, according to news reports. Place had also been shot in the face. Within days, Schaefer was being questioned in connection with their deaths.

The murders of the Fort Lauderdale teens were the only homicides Schaefer was convicted of, though he was identified as a potential suspect in as many as 30 killings dating back to 1969.

Schaefer, who was sentenced to life in prison, was stabbed to death in December 1995 by a fellow inmate at the Florida State Prison. According to authorities, Vincent Faustino Rivera killed Schaefer over a cup of hot water. 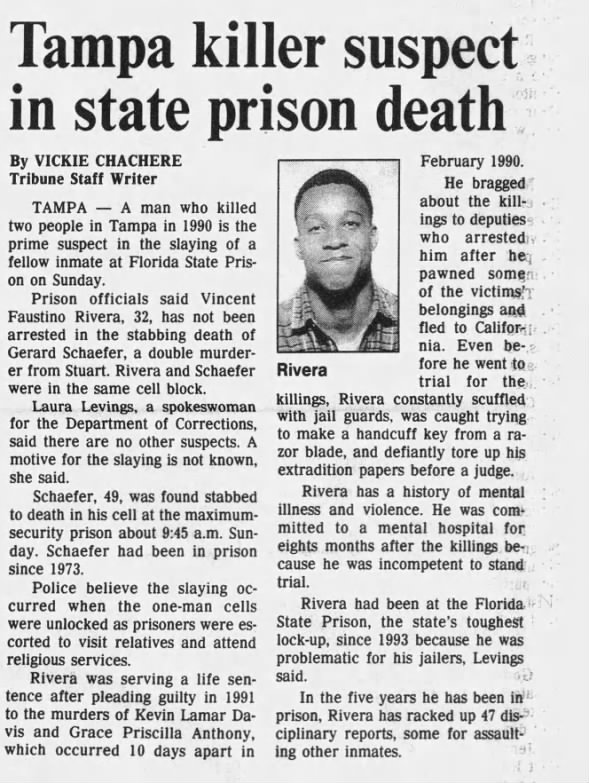 Several of the crimes Schaefer is suspected of committing bore many striking similarities to both the Trotter-Wells assault case and the Place-Jessup murders. At the top of that list was the fact they were bound to trees before they were slain.

Because “Singer Island Jane Doe,” now known to be Susan Poole, was found bound to a mangrove tree, Palm Beach County authorities suspect Schaefer could be her killer.

In addition, though he had been convicted in the assault case and sentenced on Dec. 22, 1972, the judge allowed his formal sentencing and the start of his jail term to begin after the holidays.

Poole vanished around that same time. By the time her remains were found, Schaefer was in prison for the Place-Jessup murders.

In April 2014, the girl’s remains were exhumed, and DNA was collected. Cold case detectives were unable to match her genetic profile with any of those in the FBI’s Combined DNA Index, or CODIS.

“Since developing a DNA profile, several women were excluded with STR testing,” Othram officials said in a news release. “In 2019, a new facial reconstruction of the girl was prepared by the Palm Beach County Sheriff’s Office, but her image was not recognized by anyone.”

In December, detectives turned to Othram, which was able to develop a more thorough DNA profile.

DNA obtained from Poole’s mother, who is now in her 90s, proved that the Jane Doe found in 1974 was her daughter.

Springer said Thursday that investigators are now seeking several of Poole’s friends and acquaintances in the hope they could fill in some blanks about her activities around the time she vanished. In a Facebook post, authorities identified those friends as Julie Hunt, Michelle Williamson and Greg Anderson.

“These three could help us find the missing piece and give her family closure,” the post read.

Springer said Poole’s mother and siblings have found some measure of peace in her identification.

“The family was happy to know what happened,” the detective said. “It’s been a long time waiting to see what happened to their sister.”

Anyone with information on Poole’s activities or her possible connection to Schaefer can reach out to Springer at 561-688-4013. Callers can also remain anonymous by calling Crime Stoppers at 1-800-458-TIPS.

Officials: Newborn baby girl found wrapped in blanket on a hill in Florida