A study by UW helps Washington state build a plan for dealing with an opioid crisis, but also reveals surprising statistics that have nothing to do with opioids.

People in our region are dying in record numbers from meth overdoses – about half the number of people who die from opioid overdose.

“We don't talk about methamphetamine much but it's really very severe,” said Caleb Banta-Green, principal research scientist at the Alcohol and Drug Abuse Institute at the University of Washington.

Meth is a drug that doesn't get as much attention in Washington State as heroin but studies show it is a growing problem.

New UW health survey results found 78 percent of heroin users want to stop or reduce their opioid use. With meth users, that number is 47 percent.

“It’s important for the public to understand that many people who are using drugs, don't want to be using them,” Banta-Green said.

And he says there's a possible reason for why fewer meth users are less interested in stopping or reducing their drug use. 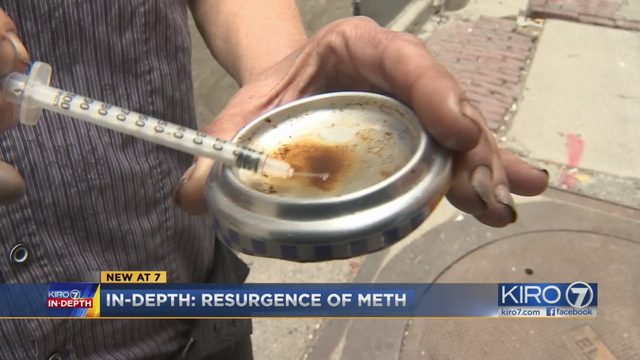 “When using opiates every day, four to six times a day, you’re physically dependent. If you don’t use, you go into withdrawal and you feel like you’re dying.

"Meth is different. It does impact neurotransmitters but it doesn't have the same type of withdrawal. People don't tend to use as many days a week and people tend to use in a more functional way. So if you're homeless and you don't have much money, meth is an appetite suppressant and keeps you awake so you can be safer at night," Banta-Green said.
Gov. Jay Inslee proposed next steps this week to improve access to care, focusing on the opioid crisis with budget and legislation proposals to expand treatment and reduce stigma. But the plan, doesn't address Washington's meth problem.

“Do you think there needs to be a state-specific treatment plan to target meth use?” KIRO7’s Deedee Sun asked.

The survey found, compared to 2015 survey results, prevalence of drug use largely stayed the same for all drugs -- except meth, which spiked by 13 percent.

He says meth used to be produced in the U.S. 10 to 15 years ago, but now primarily comes from Mexico.

“There is tons of cheap meth coming in for years now. So part of it is there’s been a little less cocaine, and tons of very high potency, very cheap methamphetamine out there,” Banta-Green said.

“Meth users will benefit from good counseling,” he said about the most effective treatments for the drug. “The idea with helping treat methamphetamine is it’s really just making sure everybody who needs access to really good health care, can get good access to health care.”

The study also found many heroin users, also use meth:
"Over three-quarters (78 percent) of people whose main drug was heroin reported they had used methamphetamine by itself in the last three months and over half (52 percent) had used it in combination with heroin. Comments made by several respondents whose main drug was heroin offer a glimpse into the context of their methamphetamine use: 'Using heroin…meth just comes along with it these days.'"

Banta-Green says because of dual-drug users, getting heroin use under control will likely also help reduce methamphetamine deaths.