‘Tell my mom that I love her if I die,' teen pleads as van seat fatally crushes him

CINCINNATI — Two 911 calls show that a Cincinnati teenager pleaded for help as he was crushed to death by the seat in his van Tuesday afternoon in a parking lot near his school.

Kyle Jacob Plush, 16, was found dead by his father about six hours after he made the first 911 call, according to WCPO in Cincinnati. A preliminary autopsy report indicated that he died of asphyxia due to compression of his chest.

His death was ruled accidental.

"At this time, there is no indication of foul play or evidence of a drug overdose," Hamilton County Coroner Dr. Lakshmi Sammarco said in a written statement. "Our deepest sympathies are with the family and friends of Kyle."

Sammarco's statement did not offer details of how Plush was crushed, but Honda in November recalled 800,000 Odyssey minivans because the vehicle's second row seats can tip forward if not properly latched. The recall was for vans from 2011 to 2017.

Plush's van was a Honda Odyssey, though the year was not immediately known.

Hamilton County Prosecutor Joseph Deters confirmed to WCPO in Cincinnati that Plush died of positional asphyxiation when he became trapped in a seat, but Deters said it was the van's third-row bench seat.

His office is investigating the incident to determine exactly how Plush's death occurred.

"We are actively trying to identify experts to assist us in this investigation," Deters told the news station.

Officials with the city of Cincinnati and the Hamilton County Sheriff's Office are also investigating why dispatchers, police officers and deputies were unable to find Plush in time to save his life.

Audio of Plush's 911 calls, which have not been released by the media due to their graphic nature, indicated that he became increasingly desperate as his condition deteriorated. In the first call, placed shortly after 3 p.m., the teen was gasping for air as he screamed repeatedly for help, saying he was stuck inside his van "at Seven Hills."

Plush was a sophomore at Seven Hills School, a private academy for grades pre-K through 12. He died in a parking lot near the school's Hillsdale campus.

"I can't hear you," Plush told the dispatcher, according to WCPO. "I need help. I'm gonna die here."

The dispatcher either could not hear him clearly or did not understand what he was trying to say. She asked, over and over, "Where are you? What is the address?"

"I probably don't have much time left, so tell my mom that I love her if I die," the teen said.

A timeline established by the news station indicates that Plush got disconnected about six or seven minutes after he placed his first call. Officers who were dispatched when that call ended tried calling him back, but the call went to voicemail.

When they did not get a response, the officers marked their assignment complete, the WCPO timeline said.

In his second call, Plush again made it clear that he knew he was dying.

"This is not a joke. I'm trapped inside my gold Honda Odyssey van in the parking lot of Seven Hills Hillsdale." 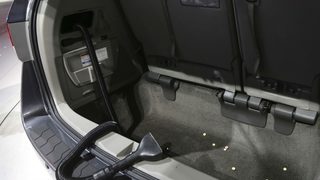 As the second call ended, Plush appeared to struggle to breathe.

Throughout the second call, Plush could be asking, "Hey, Siri?" It appeared that he used the iPhone voice command to call 911.

Investigators did not say where in the van they found the teen's phone.

It was also unclear when Plush's second call, which lasted about three minutes, was placed.

A Hamilton County sheriff's deputy working a traffic detail at Seven Hills responded to the calls about 10 minutes after city officers marked their assignment complete and 32 minutes after Plush's first call for help, WCPO reported.

The deputy was also unable to find Plush's van, and though he continued searching, he questioned whether the calls had been a prank.

The dispatcher pointed out that she put in the 911 system that the caller could be in a thrift store parking lot across the street from the school, Fox19 in Cincinnati reported.

"I was in there. I just looked in a van over there. I didn't see anybody in it," the deputy said, according to the news station.

It was not clear if the van the deputy found was Plush's minivan.

Plush's mother, identified by his elementary school as Jill Plush, also called 911 Tuesday evening after she and his father, Ron, determined he was missing.

The parent of one of Kyle Plush's friends wrote in a Facebook post that the match was to be the teen's first.

"He had been on the practice squad of the tennis team and was due to play in his first match yesterday," Jackie Taggart-Boyd wrote. "He didn't show up. Hours later, they discovered him."

Taggart-Boyd indicated that Plush had a physical disability, but did not specify what that disability was. She said it never stopped the teen from trying everything.

She said her son, Spencer, described his friend as the "most positive person he ever met."

"I can tell you that Spencer spoke of Kyle often," the distraught parent wrote. "I only met him a couple of times, but every time Spencer told me a Kyle story, he ended it with, 'I LOVE Kyle!'"

A Seven Hills School spokesperson said in a statement that Plush started attending the school in the sixth grade.

"He was a young man of keen intelligence, good humor and great courage, and this whole community feels this loss very deeply," the statement read.

A classmate, Preston Luniewski, told WLWT-TV that Plush was a "spectacular" person.

"He just lit up the classroom," Luniewski said. "He would always be in class, paying attention, really productive in that environment."

Counselors were called in to help students and staff cope with the loss.

"Some of our older children have siblings who are currently in high school and have been contacting me throughout the day looking for a place to gather," Patty Normile, principal of the school, wrote on the school website. "We will use the strength of prayer, compassion and empathy to help our Mercy students, alumni family and friends."

Normile wrote that besides his parents, Plush also has a sister in the seventh grade.

Officials: Newborn baby girl found wrapped in blanket on a hill in Florida