Rapper 21 Savage arrested by ICE], lawyers say he overstayed visa 'through no fault of his own'

ATLANTA — UPDATE 3:30 p.m. EST Feb. 4:  In a new statement released to WSB and other media outlets, attorneys for 21 Savage said the rapper "never hid his immigration status" and applied for a U-Visa two years ago.

"The Department of Homeland Security has known his address and his history since his filing for the U-Visa in 2017, yet they took no action against him until this past weekend," lawyers Charles Kuck and Holly Baird said in a statement.on behalf of their client. "ICE can only continue to detain individuals who are a threat the community or a flight risk to not show up at their hearings."

“As a minor, his family overstayed their work visas, and he, like almost two million other children, was left without legal status through no fault of his own,” the statement said. “This is a civil law violation, and the continued detention of Mr. Abraham-Joseph serves no other purpose than to unnecessarily punish him and try to intimidate him into giving up his right to fight to remain in the United States.” 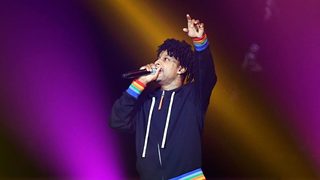 The lawyers argue the rapper, whose given name is Shayaa Bin Abraham-Joseph, isn’t a flight risk or a danger to the community.

U.S. Immigration and Customs Enforcement spokesman Bryan D. Cox said the rapper was detained during a "targeted operation" Sunday in DeKalb County. The agency had been working to apprehend him for "weeks or months" because he's been in removal proceedings before the federal immigration courts, according to Cox.

Abraham-Joseph remained in immigration custody Monday; it's up to a federal judge to decide if he's eligible for bail. His attorneys said he's been denied bond and he hasn't been charged with a crime.

"We are working diligently to get Mr. Abraham-Joseph out of detention while we work with the authorities to clear up any misunderstandings," Dina LaPolt, the rapper's lawyer, told The Post in a statement. "Mr. Abraham-Joseph is a role model to the young people in this country, especially in Atlanta, Georgia, and is actively working in the community — leading programs to help underprivileged youths in financial literacy."

His via application is filed under code that allows crime victims to seek legal status. The lawyers didn't say what crime he was a victim of, but the rapper has long said he was shot six times in 2013.

Original story: U.S. Immigration and Customs Enforcement arrested rapper 21 Savage early Sunday morning, claiming that he is actually from the United Kingdom and overstayed his visa, The Atlanta Journal-Constitution has learned.

Abraham-Joseph, 26, has said he's from Atlanta and has long been considered a local act. In August, he gave free school supplies to more than 2,500 DeKalb County school students.

"Mr. Abraham-Joseph initially entered the U.S. legally in July 2005, but subsequently failed to depart under the terms of his nonimmigrant visa and he became unlawfully present in the U.S. when his visa expired in July 2006. In addition to being in violation of federal immigration law, Mr. Abraham-Joseph was convicted on felony drug charges in October 2014 in Fulton County, Georgia.

"Mr. Abraham-Joseph is presently in ICE custody in Georgia and has been placed into removal proceedings before the federal immigration courts. ICE will now await the outcome of his case before a federal immigration judge to determine future actions."

A representative for the rapper has not commented on the arrest.