NASSAU COUNTY, N.Y. — A New Jersey serial killer known as the “Torso Killer” for the damage he inflicted on some of his victims has pleaded guilty in New York state to the 1968 murder of a Long Island dance teacher.

Richard Cottingham, 76, also admitted to strangling four additional women in the 1970s in Nassau County. The five victims addressed in court on Monday brings the total number of murders to which authorities have tied Cottingham to 16.

Cottingham has estimated his number of victims as closer to 100, according to police. Monday’s plea is the second time in as many years that Cottingham has admitted in court to killing multiple victims.

The serial killings of five women had gone unsolved for decades until a breakthrough in one case tied Richard Cottingham, known as the Torso Killer, to all five. https://t.co/NYl1A6WBG8

Also known as the “Times Square Ripper,” Cottingham’s nicknames were obtained through the sheer brutality of his crimes, as well as the location where he encountered some of his victims. In December 1979, firefighters found two of his victims, missing their heads and hands, in a burning hotel room a few blocks from Times Square.

The elderly, ailing murderer, who attended Monday’s plea hearing and sentencing via video, has not been charged with all five Nassau County murders because he is already serving more than 200 years in a New Jersey prison.

A New York judge on Monday tacked on another 25 years to life in prison for the murder of Diane Cusick, 23, of New Hyde Park. The children’s dance teacher failed to return home the night of Feb. 15, 1968, after going the Green Acres Mall in Valley Stream after work to buy a new pair of dancing shoes.

Cusick’s parents grew worried when the stores closed and there was no sign of her. Just after midnight, they drove to the mall and found their daughter’s white Plymouth Valiant parked outside. 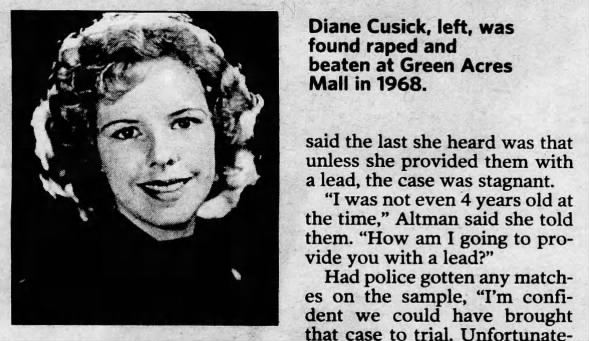 The horrified couple found Cusick’s body in the back seat, her hands bound and a band of adhesive tape over her mouth, Nassau County prosecutors said. Cusick had been raped and beaten before being suffocated.

In addition to the Cusick murder, Cottingham admitted Monday to killing Mary Beth Heinz and Laverne Moye in 1972 and Sheila Heiman and Maria Emerita Rosado Nieves in 1973.

Cusick had been estranged from her husband for a couple of years when she was slain. A teacher at Wakefield School of Dance in Oceanside, she and her 3-year-old daughter lived with her parents.

Jim Martin, Cusick’s brother, recalled his parents’ trauma during his victim impact statement in court on Monday, according to the Bergen Record. When his parents found his sister, they were unsure if she was dead or alive, he said.

Their father, Bernard Martin, lifted her from the car and ran with her in his arms toward the highway in a desperate bid for help, the newspaper reported. When his sister’s casket was closed for the final time, his mother wept and begged that she not be taken away.

Cusick had asked Ruth Martin to accompany her to the mall the night she was slain, Newsday reported in 2006. Martin had strep throat, however, and the doting grandmother chose to stay home and care for Cusick’s young daughter, who was also ill. She never spoke to or saw her daughter again.

Both of Cusick’s parents and one of her brothers died never knowing who was responsible for her murder.

Martin also spoke of the panic and fear Cusick must have felt as her life was draining from her body.

“I tried hard to put out of my mind the horrors that my sister had to endure in the last minutes of her life,” Martin said. “I’m sure she tried to fight this animal off, but he was so big, and she was so small.

“As she fought, he punched her face, put tape over her mouth and nose. He then held her down and raped her. Then, like it was nothing, he strangled the life out of my beautiful sister.”

Cottingham, who has been in prison since 1980 for a string of murders in New York and New Jersey, was tied to Cusick’s death earlier this year through DNA he left on the young mother’s body. He was arraigned on a second-degree murder charge in June. 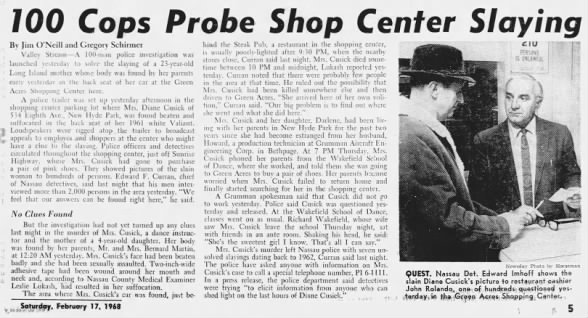 At that time, Cusick’s daughter, Darlene Altman, thanked the investigators who had finally caught her mother’s killer.

“I never thought I would see this day, but all these people got justice for my mom,” Altman said.

“You stand before the court now, over 50 years after you have committed your crimes, sick and infirm,” Fink said. “But make no mistake, Mr. Cottingham. No one has any sympathy for you.

“There is no sentence I can impose that would truly be enough,” Fink said.

“Today is one of the most emotional days we’ve ever had in the Nassau County district attorney’s office,” District Attorney Anne Donnelly said at a news conference following the sentencing. “In the case of Diane Cusick, her family has waited nearly 55 years for someone to be held accountable for her death.”

A predator in their midst

Cusick’s family was joined in court by family members of Heinz, Moye, Heiman and Rosado Nieves, whose murders came up as Cottingham was questioned regarding Cusick and any other cases he might be responsible for in Nassau County.

Donnelly said details of those four murders were withheld from Cottingham to ensure that anything he told authorities about the women was the truth.

“We did not want a scenario where a serial killer claimed credit for a murder he did not commit,” Donnelly said, according to The New York Times.

Cottingham knew details of the crimes that only the killer would know, the prosecutor said.

“We are confident that he killed all five of these women,” she told reporters.

Heinz, 21, was found floating face down in a muddy, shallow brook the morning of May 10, 1972, in Rockville Centre.

“Heinz was found without shoes and the medical examiner determined her death to be as a result of asphyxia due to strangulation,” Donnelly’s office said in a news release. “She also suffered multiple contusions and abrasions of the face and neck. The young woman, who grew up in Mineola, was working as a mother’s helper at a home in Bellmore at the time of her murder.”

Three months later, on July 20, 1972, an 11-year-old boy stumbled upon Moye’s body in the same spot in the brook. Moye, a 23-year-old mother of two from Queens, had also been strangled. 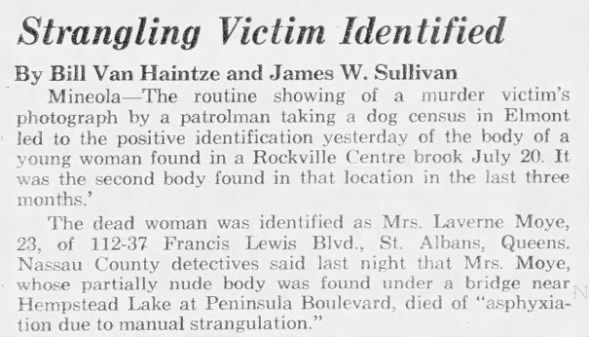 A 1972 story in Newsday reported that Moye, who was separated from her husband and living with family, was identified a week later after a patrolman taking a dog census showed the slain woman’s photo to a woman he was speaking to.

That woman was Moye’s mother. Moye’s identity was confirmed through fingerprints on file at Nassau Hospital, where she worked as a ward clerk, the newspaper reported.

John Moy holds up a photo of his mother Laverne Moy who was strangled to death at 23 years old by the “Torso Killer” #nbcny pic.twitter.com/rdJxCURG37

A year to the day after Moye was found slain, Heiman’s husband returned from a nearby department store to find his wife bludgeoned to death in the bathroom of their North Woodmere home. Newsday reported that she had been struck at least 15 times.

“The 33-year-old mother of three suffered multiple lacerations to her skull, a fractured jaw and a lacerated jugular vein,” prosecutors’ news release said. “Sheila Heiman was employed by a Brooklyn book company at the time of her murder.”

The couple’s children were away at summer camp when their mother was slain. The Daily News reported at the time that their mother was killed while their father was buying presents for their return. Two days after Christmas 1973, maintenance workers at Jones Beach found Rosado Nieves’ body in a weeded area on the north side of Ocean Parkway. The 18-year-old Puerto Rican immigrant, who lived in Manhattan, had been strangled before her body was covered with plastic bags and wrapped in a blanket.

Cottingham was a married father of three who lived in Lodi, New Jersey, and commuted to Manhattan for his job as a computer operator. According to the Times, he told his wife he was working nights when he was really preying on sex workers who he found in Times Square.

Donnelly emphasized on Monday, however, that not all of Cottingham’s victims were sex workers. Heinz was a nanny, for example, and Moye, a hospital worker.

“Richard Cottingham killed who he wanted, when he wanted because he’s a serial killer,” Donnelly said. “That is what he is.”

Western Washington city named one of the safest in the country